People of the first kind have little or no problem, unless they are over-confident, which would be counter-productive! On the other hand, those who lack confidence will most probably suffer in life because others might take advantage of them, and they could end up feeling depressed or dissatisfied in life. Confident people seem to get the best jobs, the most attractive dates, well … practically everything that is considered good, leaving almost nothing for those who are shy or who hold themselves back too much.

Here, we shall focus on those who lack confidence and who, very often, grumble about how other people hurt, or mistreat them. This attitude is often referred to as having “the victim” attitude, reflecting how these people perceive themselves. So what can they do to change this?   Before anything else … they must truly want to change.

No change will happen unless there isn’t a genuine will to change! But ‘will’ alone is not enough.

How do you see yourself?

This is where everything starts. What we call our "Self Image” determines what value we assign to ourselves, our price-tag, if you will.

You might notice that those who lack confidence will not consider themselves valid or important enough. To illustrate this a little better, if they were to compare themselves to a ‘vehicle’ these people would see themselves as a small, modest car with no luxury or special features whatsoever. Now until this low perception ( limiting-belief ) about themselves changes, nothing else will change.

We all come across the kind of people who insist that they are not good at anything, or those who would prefer to give the right of way to others, under any circumstance, so as “not to hurt anyone” … perhaps because they believe that other people are often selfish and feel hurt by them.

However, in reality, no one can hurt you without your own consent. ( see note )   But what does this really mean?

Right, imagine a heavy rainfall, a hailstorm. The rain and the hailstones cannot enter your house unless you open the window … yourself! 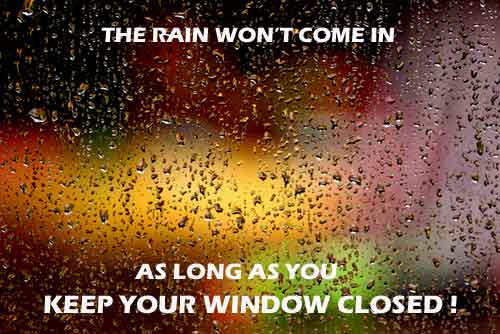 So when anyone says anything that you feel is offensive towards you, what truly hurts you is the repetition that 'you' keep playing inside your own head (the Internal Voice that we spoke about in another article).

When a person recognizes a certain self-worth, he will most probably not allow this internal dialogue to chatter incessantly, thereby destroying his morale and confidence. So what is it that causes one to have a low self-esteem?

Very often this is taught – perhaps unintentionally – since early childhood. Parents or friends who repeatedly criticise are a principal cause.   So what may be done to change this low self-value, this low self-worth?   There are various measures one may resort to.

Measures that may bring the desired changes.

Posture – When one holds an upright posture, the Mind gets the message that its owner is feeling confident.   Can you think of a time when you are feeling great?   What kind of posture would you have then?   When one regularly holds this kind of posture, people around him get the message that he won’t be trodden on.   Similarly, his own Mind will get the same message and the changes starts happening from the inside out.


Affirmations – These are sentences that a person repeats to himself and which act exactly in the opposite way that negative criticism (from others or even oneself) does.   Affirmations, by their nature, have these 3 characteristics.

They must be Personal, Positively stated, and in the Present tense.

So think about what you wished that Reality had been, for example, “I wish that I were confident and successful.”

Your Affirmation could, therefore, be: “I am confident and enjoy success regularly,”   as if that was already happening.

Here, you would write a brief account about something that made you feel great (confident about yourself).   The way this works is that whenever you feel lacking in self-confidence, you could re-read these episodes from your own life, accounts that are true evidence of those times when you were confident and successful   (but which you would normally have forgotten, or mitigated as if they were nothing along memory lane). This will raise your attitude to a more positive one.


Don’t allow Negativity … not from those around you, and much less from yourself.   If need be, change the company you keep, when you find that some people are chronic moaners. Similarly, however, when you catch yourself pulling yourself down … stop it.   Change the words you use to reflect positive affirmation, whatever your reality may be at that moment.

Find and hang out with more positive people!


Visualization – which is the use of your imagination in a formal manner. This may be done in various ways.

One great method is to write a small (mental movie) 'script' wherein you describe yourself in a situation that you remember where you were really confident. Read this script every morning, upon waking, and/or every night, before closing your eyes to sleep.


Hypnosis; either by using self-hypnosis CDs, or by making use of a professional hypnotherapist, of which one may find many nowadays.


A change in perception regarding Self-Love. To love yourself is NOT the same as being selfish! More than that, to ‘not’ love yourself is actually the recipe for disaster. Those who love themselves also love others, whereas the selfish person loves only himself. Remember the beautiful words from the song by Whitney Houston that go … “learning to love yourself is the Greatest Love of All”.

When you love yourself you will have more to give, you will not tolerate disrespect from others (and much less from yourself).


To conclude this article, you may now click the following link to visit the Appendix for some important Confidence Quotes.

Quoting Eleonore Roosevelt — "No one can make you feel inferior without your consent."

return to the article.

Thank you for sharing our articles!

If you feel that this information can be beneficial to someone you know, then please feel free to share this page, either by using the Form below, or by sending the following 'url' (address) to your contacts.

You may copy/paste this and send it either via email, or post it as your Facebook status. Thank you!

Your email must be correctly configured

Terms of use: All services offered in this website are rendered following careful discussion and agreement with the client every time. The use of any services is, therefore, to be understood to mean that the client has considered and responsibly agreed to these conditions governing the rendering of such services. Moreover, any content found herein in whatever form is provided bona gratia and the owner of the website refutes any repsonsibility towards any claims related thereto. The material found on this site and given in one-to-one sessions is also available elsewhere and is in line with current trends in personal development.